By Tyler Wilkins, The Atlanta Journal-Constitution

Nadine Kezebou’s pilgrimage to becoming a professional soccer player started by kicking a ball in a field near her childhood home in Edea, a small town in the West African nation of Cameroon.

Kezebou, the youngest in a family of five and raised by a widowed mother with little money, turned her hobby into a career and played for professional teams in Cameroon, Germany and the U.S. She landed in Alpharetta after graduating from Georgia State University and now uses her prowess for soccer as a coach and private trainer.

She formed The Nadine Foundation a few years ago to give back to children in her home country. She spent about three years raising money to build a school in the rural town of Mfou, Cameroon, enlisting the help of her teenage players on the Gwinnett County-based Atlanta Fire United Soccer Club.

Kezebou opened The Hale Academy in August, completing her mission of providing an education to children. The elementary school includes 27 classrooms, in which hundreds of young kids learn in English and French from 26 teachers. 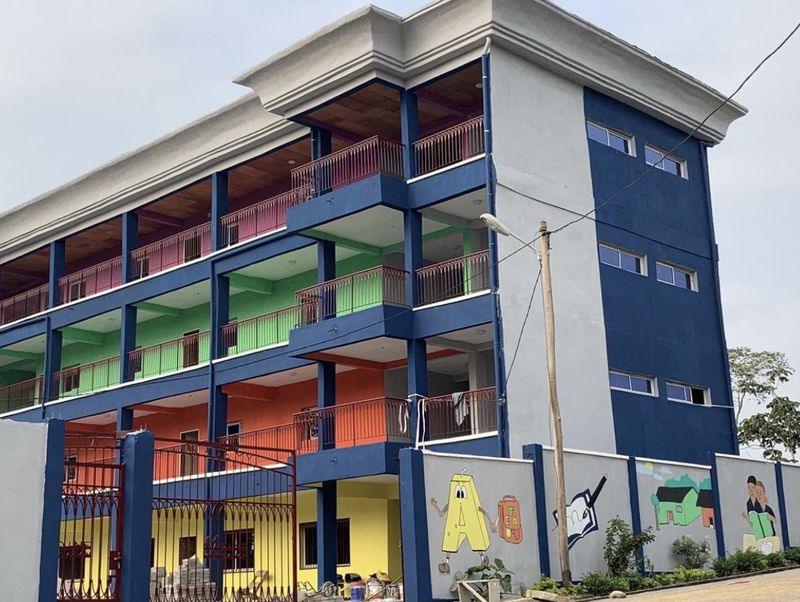 “It’s a dream come true,” said Kezebou, 32, after returning from a three-month visit to open the school. “... It was a big challenge. I set it up and said, ‘I need to achieve this goal.’ And I did it.”

It cost nearly $2 million to get the 220,000-square-foot school up and running, Kezebou said. She gathered the money from private training sessions and fundraisers.

Two of her Fire United players — 18-year-old Marilee Karinshak and 17-year-old Molly Pritchard — were heavily involved in fundraising efforts for the school.

The seniors at Greater Atlanta Christian School participated in an auction, catering event, raffle and soccer camps to help their coach raise money for the school. They also donated school supplies and old soccer uniforms and cleats to the school.

The project gave the students perspective on their life, reminding them not to take things for granted. Pritchard, like many teenagers, complains about going to school but now recognizes that children in other parts of the world beg for an education.

“I view the world much differently now because of her,” Pritchard said. “.. (it taught me) to be to be grateful for everything you have.”

The coach’s story of overcoming adversity inspired the lifelong friends to get involved with raising funds for the school. The pandemic prevented the students from attending the school’s opening ceremony, but Karinshak said it feels great watching the project go from blueprints to children singing and learning.

“It was really cool to be able to help combine soccer with giving back and making a difference, especially for something like education where it’s a lasting impact for all these kids,” Karinshak said. “... We wanted to support Coach Nadine because she’s done so much for us.”

It costs approximately $2,000 per month to upkeep the school. Kezebou will continue raising money to support it, hoping to build another school in the future for children to attend middle school.